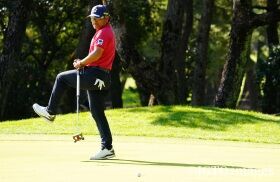 19th year professional has made a gigantic move on Saturday with bogey free round with 8 birdies to score 63.
"Thinking back to my performances for past few weeks, I played like a totally different person today."
He is now total 10 under and stands as 4T, just 2 shots behind the leader.

"My iron shots were accurate for several tournaments, and now my putting has caught up."
He placed a bloomstick putter which was put away at his home into his bag this week, and suddenly reading the greens became so easy for him.
"I was really nervous on the greens, lost my confidence. But with this putter, I aim and putt. It is stress free, best in my career."

Yusaku started out as 31T at 2 under. He made 4 birdies in a row from 4th. It was 1-meter, 2.5-meter, 6-meter, and 7-meter. Yusaku has used bloomstick putter before, but after the anchoring was ruled prohibited in 2016.
"It took courage to place the bloomstick in the real tournament, but I was that desperate."

His struggle after getting infected with COVID-19 made him have difficult time after he came back to the Tour from Panasonic Open in September. A full month of rehabilitation took away his sense of putting.
"I totally lost it. And as I played, it got worse. Especially I made bad movements on my left hand, and I just couldn't hit the putts to where I aimed for. Bloomsticks are hard to handle without anchoring, and I need practice. I asked for Kodai Ichihara, who has been using the bloomstick. He said, there are many different ways to handle the bloomstick, but basic move is to putt starting
from the shoulders upward and make simple down swing. This worked like magic."

If Yusaku wins, it will be since he last won at Dunlop Phoenix in 2015.
"Young guns don't have to worry about doing great, I must push myself to hang in there."
May be this week, 41 years old Yusaku may show the young guns that days of elder guys is not over just yet.